Hello, I am part of Chertsey Radio Club.

Over 3 weekends in July there were several amateur radio experiments run from the International Space Station and I would love to share with the BBC and the general public what has been happening, hopefully this will encourage some people to look and have a go at our hobby, or spark an interest in space or communications in general.


Chertsey Radio Club is also proud to be associated with AMSAT-UK, who help track monitor and support all things satellite related and keep the community updated with all the latest operating and technical data on the satellites.

Part-1
Firstly, on 5th July, The ISS crew were instructed to test out 2 cube satellites, Tanusha-1 and Tanusha-2, before deployment. The Tanyusha-YuZGU 1 and 2 (also TanyushaSWSU 1 and 2 or Tanyusha 1 and 2), also known as Radioskaf RS-6 and 7, are two small Russian experimental satellites, which are to be deployed from the ISS during a spacewalk. They were developed at the Southwestern State University (SWSU, YuZGU), Kursk The satellites will broadcast greetings messages in Russian, English, Spanish and Chinese. The test was to ensure the Satellites would both transmit their messages, so using the ISS onboard Amateur radio equipment, relay the messages from the satellite out on 144.800Mhz FM. Amateur radio operators around the world were given an opportunity to hear the messages and I could receive them on my radio set at home.

Part 2
On Saturday 8th July, being experimenters in radio communications, we were very lucky to be able to send voice communications via the International space station, whilst the satellites were being swapped over. The uplink was on 437.050Mhz (output of the Satellite) and downlink on 145.800Mhz I was very lucky to make an initial contact with another Amateur radio station in Spain EA4SG. On the second pass a few hours later, I could talk to Amateur radio operators in Spain, France and I also spoke to my friend in the UK Abdel (M0NPT) which was an exciting and amazingly rare opportunity.

Part 3
On the last weekend Amateur Radio on the International Space Station (ARISS) celebrated its 20th anniversary – 20 years on both Mir Space Station and on the ISS.
This organization helps to run and maintain amateur radio on the space station, and set up and run the contacts with many schools around the world including Tim Peake’s Principia mission when he spoke to 10 UK schools last year.
As part of the celebrations the ISS sent a set of 12 images using slow scan television (SSTV), which when heard on the radio sounds like the old fax noises.
We were able to receive the sounds and convert them into images when the ISS was in range. 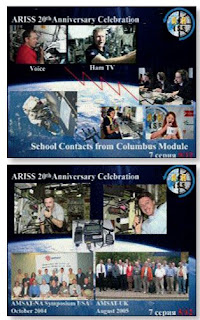 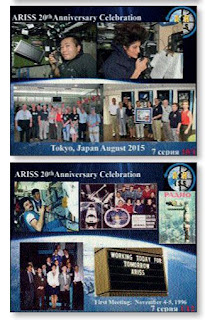 People all around the globe used simple receivers along with mobile phones, raspberry pi’s, computers and tablets to decode the images.

I was able to get all 12 of the images at home and some of them are displayed here. the full set can be seen here: http://chertseyradioclub. blogspot.co.uk/2017/07/12-sstv-imagescelebrating-20-years-of.html
I recorded a couple of the passes, so you can see how this works, but the earliest in the UK was 23:23 and transmitted through into the early hours of the morning, so we left the decoder running and went to bed.

Posted by Chertsey Radio Club at 11:03